We combine the power of psychometrics with predictive algorithms to drive smart employment choices. 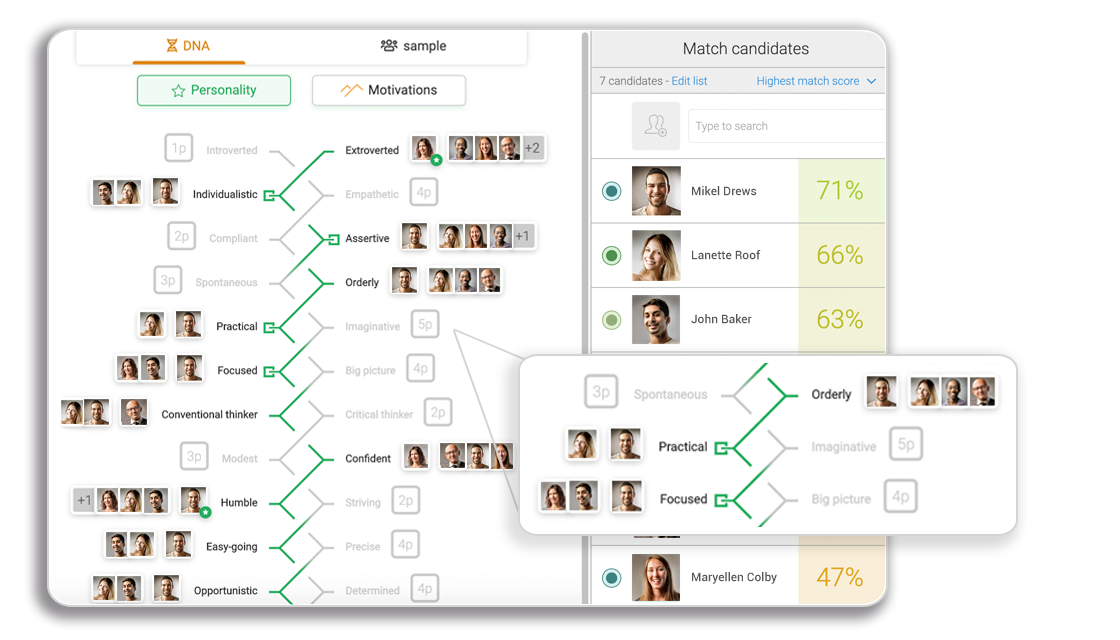 What is the MyPrint® questionnaire?

MyPrint® is a self-reported questionnaire, scientifically designed to explore individual personality and motivations - especially at work - within 20 minutes.

Personality refers to the attitudes and emotional characteristics underlying individual behaviors, while motivations refer to the desires and needs triggering, orienting and maintaining these behaviors towards a given objective.

The MyPrint® assessment is not an aptitude test, meaning it is not concerned with potential or ability, but rather with how an individual deals with their emotions, the way they relate to others or their risk orientation. These kinds of questions, that are quite personal in nature, are presented using euphemisms that allow the meaning of the question to be transferred in a more implicit way.

At a time where many assessments are black and white, and where answering a question incorrectly or not in time means failing the test, there are no right or wrong answers and no time limit in MyPrint®.

Why measure personality and motivations?

For more than half a century, research in social, behavioral and I-O psychology has shown that individual ways of behaving (i.e., soft-skills, and not only knowledge or potential) have a great impact on both adaptation and performance at work1,2. Personality traits and motivational factors being the strongest predictors of complex behaviors3, it is natural that their assessment has become critical in the context of recruitment, team management or career development.

The theoretical background of MyPrint®

The traditional models behind MyPrint®

The personality dimensions of MyPrint® are based on the Five Factor Model (FFM or Big 5) of personality4, which is considered the standard in personality traits measurement as its reliability across cultures and links to efficiency at work have been proven by more than 40 years of research1. The MyPrint® personality part is thus based on a trait approach, which is commonly recommended over the type approach in personality assessments at work, especially for recruitment purposes, as it gives a more detailed description of individual psychological characteristics and is ultimately a more effective predictor of behaviors.

The motivations dimensions of MyPrint® were derived from Maslow's Hierarchy of Needs5 and the Self-Determination Theory6, which both left a strong legacy in motivational factors definition and measurement4. The MyPrint® motivations part thus includes extrinsic as well as intrinsic motivators, as they have both been proven to be clearly linked with work performance and retention2.

We performed a meta-analysis of the psychological literature and declined the traditional models cited above in order to create a unique and holistic model of personality and motivations. The MyPrint® questionnaire measures 13 personality dimensions (covering 26 traits total) through 78 questions, and 11 motivational dimensions (covering 22 factors total) through 77 questions.

In addition, the personality dimensions were clustered into 4 personality themes, that are often considered as critical to evaluate in a professional context: Express (yellow), Address (blue), Dare (red) and Adapt (purple). 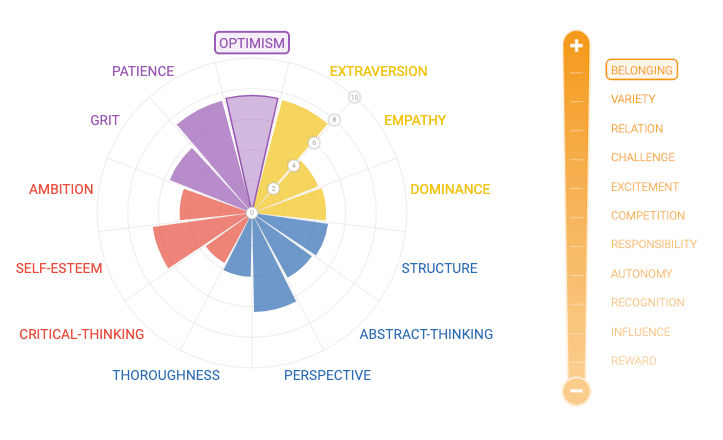 In addition, the personality dimensions were clustered into 4 personality themes, that are often considered as critical to evaluate in a professional context: Express (yellow), Address (blue), Dare (red) and Adapt (purple).

For each MyPrint® question, respondents are presented with a pair of statements referring to attitudes, feelings or needs in certain situations, and they must choose the statement that best represents them. Yet, we also allow them to indicate in which extent this statement better suits them.

This question format is scientifically called “multidimensional binary forced-choice with graded preferences”. Behind this barbaric name actually lies one of the most recent and useful innovations in psychometrics7. First, we benefit from the forced-choice format which, compared to other questionnaire formats, has been shown to successfully reduce both uniform response biases like acquiescence or social desirability that result in score inflation, and the likelihood of respondent fatigue. Anyone who has done serious research on the forced-choice format will tell you that they have no doubt it can deliver significant advantages8. Second, the preference rating allows us to gather more information and thus to deliver even more accurate results, while significantly reducing the usual frustration of respondents regarding forced-choice formats.

A sample question in the MyPrint® assessment

In psychometrics, content validity refers to the extent to which a given measure represents all facets of its underlying psychological construct. To ensure we do not miss any facet of personality and motivations, the construction of the MyPrint® questionnaire has been conducted following an ad-hoc procedure for content validity9. In particular, the selection of our personality and motivations dimensions and items were controlled using existing psychological assessments from the International Personality Item Pool (IPIP), which is one of the most widely used batteries of benchmark tests of psychological constructs.

Construct validity refers to the degree to which a test measures what it claims to be measuring, in statistical terms. For decades, forced-choice questionnaires were pushed into the background regarding work-related assessments, despite their tremendous resistance to response biases, because what they were measuring (through ipsative scoring) was said to reflect only individual preferences and to be impossible to compare between individuals, thus questioning their construct validity10. After having represented a long challenge for psychometricians, this issue has been solved: researchers now embed the Thurstone’s law of comparative judgment into Item Response Theory (IRT) models to properly validate forced-choice questionnaires11. This method is still paradoxically ignored by a majority of forced-choice test editors on the market. As Talentoday is committed to deliver the best science, we decided to validate and calibrate the MyPrint® assessment by running a Thurstonian-IRT model on a representative sample of thousands of US professionals (see our Technical Manual below for more information).

In short, IRT applied to forced-choice questionnaires is groundbreaking for three reasons:

Construct validity is ultimately proven by estimating the internal consistency (or reliability) coefficients for the dimensions of the questionnaire. These coefficients refers to the extent to which an assessment is free from measurement error. Due to the inherent computations performed by the Thurstonian-IRT model, we have direct access, for each respondent, to the Standard Error of Measurement (SEM) of each estimated dimension score. Internal reliability coefficients thus correspond to the ratio between score variance and the sum of score and error variances estimated in the sample12. As a rule of thumb, a reliability of 0.70 or higher is recommended13.

Results indicate that every personality and motivation dimension of the MyPrint® questionnaire has a reliability coefficient greater than 0.75, with an average at 0.8.

As we are currently supporting several languages, there are still ongoing validations to make sure the test stays reliable in other non-US languages, giving us opportunities to continually enhance the MyPrint®.

Predictive validity refers, in particular for a soft-skill measurement instrument, to the extent to which scores efficiently predict an external and objective criterion of interest, such as performance or retention at work. The Talentoday team performs personalized studies for their customers on a regular basis, showing strong links between the MyPrint® results and diverse performance criteria, depending on the activity of the company.

We notably showed, when partnering with one of our clients, that customer support employees sharing specific personality traits and motivational sources tend to be on average 20% more successful than their counterparts that do not share the same characteristics. We strongly believe these kinds of studies are critical to help organizations improve in terms of human capital management.